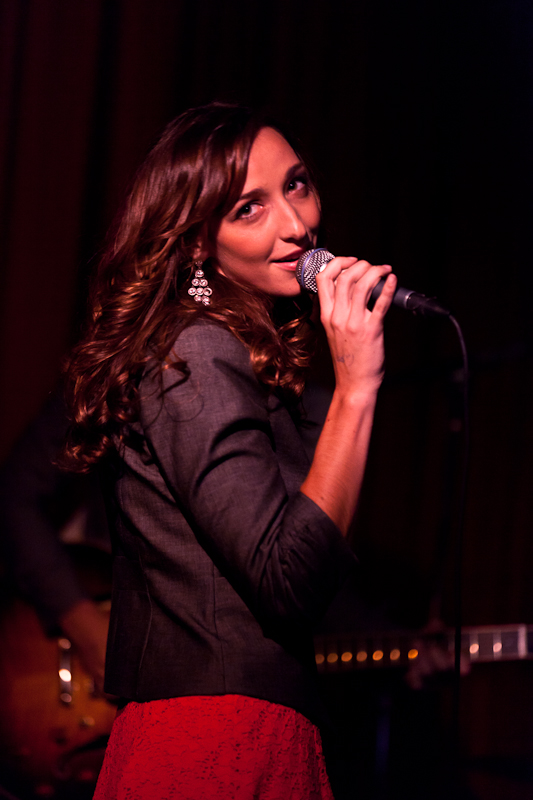 TRAKIN' CARE OF BUSINESS:  FROM BAD THE VERSE

7. Jenn Bostic and Connie Lim at Hotel Café, L.A.: Two very different, young, promising singer/songwriters who have been touring under the auspices of former Yahoo! Music and CMT exec Jay Frank’s innovative DigSinlabel, which offers free digital downloads to help seed the viral process. Playing before a sold-out house, the comely Bostic, the Philadelphia-born, but small-town Minnesota-raised artist and Berklee School of Musicalum stood behind the keyboards fronting her tight four-piece band. The now-Nashville-based performer has a bit of a country-blues feel that has led to comparisons toEmmylou Harris and Bonnie Raitt, starting off with “Let’s Get Ahead of Ourselves” and “Wait for Me,” two co-writes with “Jar of Hearts” producer Barrett Yeretsian, who looked on proudly from an audience that included her mom, to whom she dedicated the latter. “Change” is a charmingly feisty rebuke to all those country label execs who told her she was “too pop,” while she introduces “Hipsters” by playfully revealing, “I don’t date boys with tighter pants than I wear.” “Snowstorm” shows her rock side, while “Not Yet,” another Yeretsian collaboration, is a showstopper. Sitting solo at the piano, she launches into the YouTube hit “Jealous of the Angels,” a song she sings to and for her late father, who died in a car crash while she sat in the back seat on the way to school as a 10-year-old. It’s a song that connects with anyone who has lost a loved one, and is currently gaining a following in the U.K., where it was played on national outlet Smooth Radio by legendary British DJ Simon Bates. Palos Verdes native and UC Berkeley med school dropout Connie Lim is another story altogether, with a blues-soul sound that evokes the sultry style of Norah Jones along with the idiosyncratic stylings of Feist,Regina Spektor and Imogen Heap, with a healthy dose of Joni Mitchell, too. She’s remarkably accomplished and has an easy manner that seduces the audience on songs like “L.A. City,” “Thee She Walks Again” and “Fog Over Water.” The two have embarked on a multi-city tour that, through just their Facebook fan pages, has drawn audiences of between 100-200 at every stop, which is pretty impressive when you come to think of it. Frank is doing a nice job of developing these acts, making them road-ready and nurturing their recording abilities. Keep an eye on these two…they’re going places.