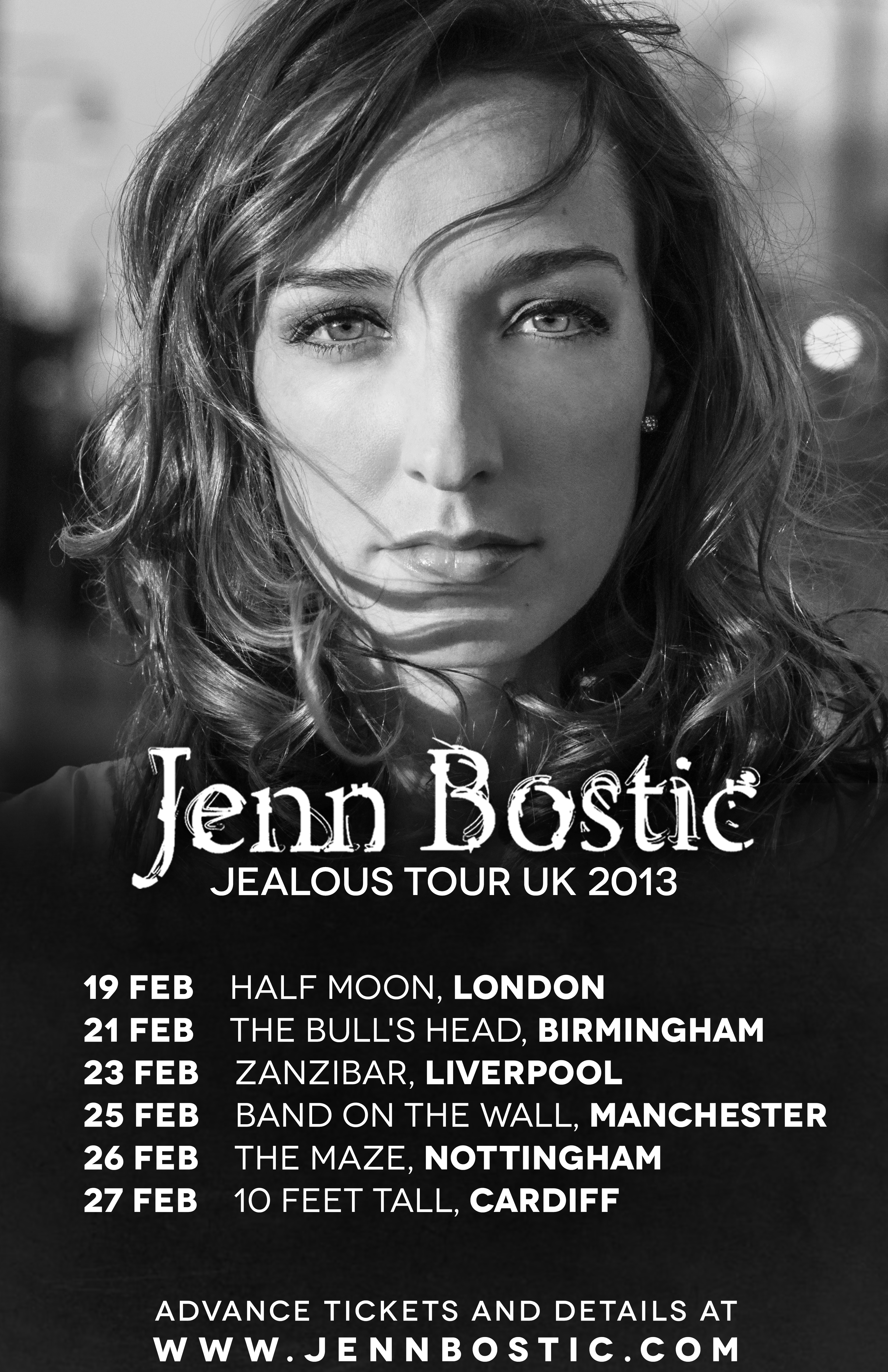 “Star in the making ****” The Daily Mirror/The Ticket

“Her music is touching the lives of listeners throughout Nashville and beyond” Musiccityencore.com

American singer songwriter Jenn Bostic, returns to the UK for a 6-date tour to share music from her outstanding debut album ‘Jealous’ (which will receive a full UK release on 25th March 2013).

Jenn’s debut UK single ‘Jealous Of The Angels’ was championed by Smooth Radio and Radio 2 with the video receiving more than 1.2 million Youtube views and Jenn performing the song on BBC Breakfast. In November 2012 Jenn made her UK live debut when she opened for Christian Kane and she is looking forward to returning for her own tour:

“It’s been a dream of mine to perform in Europe since I started singing and the tour with Christian was absolutely incredible. The reaction from the audience was overwhelming and now I’m really looking forward to coming back and playing my own shows. I’ve been playing acoustic tours across the US for the past three years and I love sharing my stories and songs and meeting new people.”

“With her powerful voice, emotive songwriting and infectious personality, Jenn Bostic holds a natural talent that has left live audiences stunned in wonderment and yearning for more.” TheMusicPress

Part of Nashville’s burgeoning DIY scene, Jenn’s music career began when she was 10 years old, in the back seat of her father’s car with her older brother on the way to school. A horrific crash that killed her dad, a musician who taught her folk songs like ‘Sunny Side of the Street’, and turned her on to Emmylou Harris and Bonnie Raitt, changed her life forever. “The first time I sat down at the piano after the accident, I shut my eyes and honestly felt my dad's presence next to me,” she explains. “I poured my heart into those first few songs. The only way I could connect with him was when I played music. I still feel that way.”

‘Jealous of the Angels’ was produced by Barrett Yeretsian (the writer/producer of the hit “Jar of Hearts” for Christina Perri) and discovered by British DJ Simon Bates, who played it on his Smooth Radio show, where the song immediately jumped into the station's Top 10 Most Played for the week. BBC Radio 2 added the song to its playlist at the end of 2012 after Jenn performed on BBC Breakfast, as fan Fearne Cotton tipped off the show’s producers about the power in ‘Jealous Of The Angels’.

"Jealous of the Angels’ is so real, and Jenn is so real, and that kind of honesty is rare. Working with her is truly an incredible experience. I was honoured to be a part of a song so close to her heart." - Barrett Yeretsian